I’ve been able to get a hold of some more HQ stills from Jon’s live television broadcast of Rodgers & Hammerstein’s CINDERELLA. Jon played the part of Prince Christopher to Julie Andrews’ titular character. There are three that are in colour so we get to see Jon’s handsomeness as well as the colour of one of his costumes.

Finally, I have Jon’s work from the 1957 live television broadcast of Rodgers and Hammerstein’s CINDERELLA. I’ve been after some high quality stills for you and I finally got them. I have to apologize for the lesser quality of the screencaps and some of the production material, however, I was limited to the quality of the DVD. Unfortunately this hasn’t been remastered for a Bluray release and I’ve found nothing denoting there will be one. Sad really considering the milestone this original broadcast has in television history. This aired live on CBS on March 31, 1957 to massive ratings, massive for that time. According to Jon who of course plays our Prince, after the airing he walked out onto Times Square in New York to empty streets. May I say, Jon never looked more dashing. The line he cuts in his dancing, costume and his fine honey-dripped voice leaves much to a girl’s heart to desire in a Prince to wish for. The way he takes Julie Andrews into his arms and eyes makes us all swoon for the day our prince does come. Until that time, Jon can be that placeholder. I know for me he’ll always have a place in my heart. I”ve also included the soundtrack for your listening pleasure. Click on the iPod and open in your preferred listening application. The soundtrack is available on iTUNES. CINDERELLA also stars Howard Lindsey, Dorothy Stickney, Alice Ghostley, Ilka Chase, Edie Adams, and Kaye Ballard. 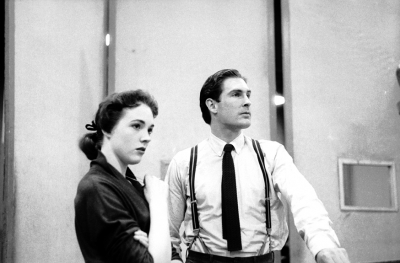 In light of the new Kenneth Branagh version of CINDERELLA due out in theatres in March, I thought it might be time to take another trip down that staircase with the glass slipper and remember Jon in his role as Prince Christopher from the 1957 live televised airing of the Rodgers & Hammerstein musical of the same name. Though in the new version the part of the Prince is being played by Game of Thrones star Richard Madden. In this version the Prince has a new name. That is Kit. Can Richard compare to Jon? I think he’s my close second since no other can compare to Jon. The clip is the part where Christopher is in search of his princess and is all about to give up hope. Here Jon joins Dorothy Stickney in a reprise of Do I Love You Because You’re Beautiful. In the making of on the DVD, Jon tells of his flub up where he sang over Dorothy. You can tell he knew he’d done the unforgivable, though I will give him a pass because he’s Jon Cypher and he was just so earnest in his wanting to find his princess. And if that princess was Julie Andrews, wouldn’t you be?

I’m hoping to get more of Jon’s work up on the site. My apologies for not having had more time to spend here as I simply adore Jon. I’m trying to get a hold of Jon’s three seasons as Major General Marcus Craig in MAJOR DAD, however, getting those seasons has been hard. I’m also trying to get Jon’s work in HILL STREET BLUES completed. Please be patient. I also have Jon’s role as General Martin Goldman in one of my favourite series TOUR OF DUTY I’m trying to convert to a usable file size so I can do good screencaps for the gallery. I know there are some of you who are asking whether I have Jon’s role as The Prince in the 1957 television live broadcast of CINDERELLA. I do have it. Unfortunately the quality isn’t all that great. I’m currently trying to find a good version of it with a large enough screencap so it would be useable for the site. I do have some stills and the music from the show I will try to get up soon. Please again be patient. I’m going through some personal things right now that is sort of making it difficult to get to the things I want to. Please feel free to check out all the images I do have up in the Gallery. Thanks.

Another example of Jon’s stunning voice. This one gave me chills. Thanks Mr. Cypher for your incredible talent.

Just because it needed to be posted. One of Jon’s singing roles. This is while I get the next round of screencaps up in the gallery. Until then enjoy Jon’s incredible voice, not to forget the hot costume that shows off the Cypher body. Mighty fine there Jon.