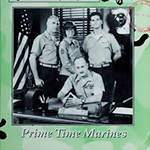 “Semper Fidelis.” Two Latin words that literally mean “Always Faithful.” Every Marine knows those two words and what they stand for — the idea of being faithful to the Marine Corps. That philosophy thrives at every Marine post in the world. It’s also evident, in a somewhat different way, at Stage 41 on the lot of Universal Studios in Hollywood Stage 41 is where Major Dad, the hit television situation comedy, is taped. The series, which stars Gerald McRaney as the straight laced, tough-as-nails, heart-of-gold Major John D. MacGillis, has been on the air since 1989. As a result, millions of Americans have become familiar with many of the customs and traditions of the Marine Corps, much like their parents did when Gomer Pyle, USMC was on the airwaves in the mid-1960s.

Major Dad is a show that places a lot of emphasis on reality. On Stage 41, being faithful means placing the same importance on doing things the way a real Marine would as is placed on delivering a punch line.

Major Jerry Broeckert, who is in charge of the Marine Corps’ Hollywood liaison office, serves as a technical advisor for the show. He spends a lot of time on Stage 41 advising the show’s production staff on everything from how a Marine handles a weapon to how the uniform is worn.

“The very day the President signed the order for the National Defense Service Ribbon, we put a star on the major’s ribbon,” Broeckert said. “And we had Marines coming down to watch the show who hadn’t even done that yet.”

For those not familiar with the National Defense Service Ribbon, the distinctive red and gold ribbon is worn by those who served in the military during a conflict. A star indicates that the wearer served in Vietnam and during Operation Desert Storm.

To an outsider, such detail might seem trivial. The actors on the series, however, find the emphasis on realism helpful.

Said Beverly Archer, who plays Gunnery Sergeant Bricker: “The assumption is that we go through a lot of trouble to be authentic, but, in fact, it makes our jobs a lot easier. It gets you more involved with your character.

“In acting, you get to reality from the external. So, if you’re developing a character, it’s very important that you wear the shoes that they wear, you walk the way they walk. All of those things create who they are.”

Archer has done her homework. Military jargon, such as “scuttlebutt,” which means gossip, or “PCS.” which stands for permanent change of station, is no mystery to her. In coming up with her character, she drew on her interpretation of what the American image of a Marine is.

“The competence, the gung-ho spirit and the dedication … I guess I tried to make her as much John Wayne as I could,” she said.

The result is a character who comes across as Marine-like as any gunnery sergeant who has ever barked orders at a wet-behind-the-ears private.

Matt Mulhern, who plays Lieutenant Holowachuk. agreed with Archer that realism is an advantage.

Speaking specifically about the technical advice that Broeckert provides, Mulhern said, “I like it a lot. It makes the show fun. Major Broeckert will watch us rehearse and if he picks up something, anything that has to do with uniforms or protocol, he corrects it right there. I think he’s on the set almost as much as we are. He’s very thorough.”

The production staff even has a barber from El Toro, a nearby Marine Corps air station, come to the set every Monday to cut the cast members’ hair so it conforms to regulations.

It’s pretty easy to tell what real Marines think of the show. Marines from nearby bases regularly attend tapings and some have actually been on the show as extras. Cast members willingly sign autographs and pose for pictures with Marines who visit the set.

The show’s success can probably be attributed to a lot of things — the acting, the comedic timing and the crisp writing, just to name a few.

But the element that can’t be overlooked is the amount of attention paid to accurately portraying a lifestyle common to about 185,000 of the few and the proud who live by the motto “Semper Fidelis.”

A ‘Major’ star speaks out

Editor’s Note: While on the set of Major Dad, Gerald McRaney, who portrays Major John D. MacGlllis was interviewed by former PROFILE staffer Karl Ulrich. Following are excerpts of the interview.

PROFILE: “How is it that you can take a group of people who are known to be serious, portray them in a comedy and still have a show that’s hailed for its believability?
McRaney: “Well, being a comedy, there’s always going to be certain liberties that we’re going to have to take. But, for me, if it doesn’t have a big payoff, or if it’s too far over the line, then it’s just not worth it. I mean, we don’t do everything by the book. But I try to keep on a course of reality as much as possible … It keeps the show honest and keeps you from taking a cheap laugh or an easy joke.”

PROFILE: “It seems everyone keeps talking about the realism of Major Dad. Did you base your character on any specific Marine that you met?”
McRaney: “No. He’s more of an amalgam of a lot of Marines that I’ve met. A lot of it was based on my brother-in-law, actually, who was an Air Force captain. He married my sister when she already had a child, so a lot of our episodes came from their lives.”

PROFILE: “I noticed you have a large collection of ribbons for the major. How did you decide which ones you wanted him to wear?”
McRaney: “Well, the first thing we did when we put this together was to build the character’s history — what combat he had been involved in, where he had been, how much time he served enlisted. We made a complete bible, if you will.”

PROFILE: “How about that Purple Heart? He certainly didn’t get that working at Camp Hollister.”
McRaney: “No, he got that for a shrapnel wound in Vietnam. I think he was a corporal at the time.”

PROFILE: “Do you receive much fan mail from actual Marines?”
McRaney: “Lots of it! Maybe not all what you would traditionally call fan mail. Sometimes, they suggest a story line or things we could improve on. They’re sort of proactive fan letters.”

PROFILE: “There’s a rumor that the major might get promoted to lieutenant colonel. Any truth to it?”
McRaney: “There’s a distinct possibility. I’m in the (promotion) zone for it.”

PROFILE: “Will that change the name of the show?”
McRaney: “No. If you notice, the kids always call me major. So, we’ll probably have an episode where they say, ‘What do we call you now?’ And I’ll say, ‘You can keep calling me major; that’s okay with me.’”

PROFILE: “Will a change of duty station come with the promotion to lieutenant colonel?”
McRaney: “I kind of doubt it. We’ve talked about the idea of a Washington (D.C.) assignment, or maybe the War College. But we’ve already brought the lieutenant with us when we had a change of station in the first season and I don’t think we can keep following each other around the globe. So I don’t think so.’’