I’m in the process of deleting the videos in the media section of the site. The reason for this is the quality of them is not that great. I want the videos to be as high a quality as I can get, so please forgive the disruption. I’ll have them all back up in HD later today. I also have some of Jon’s other work, so be patient while I work at getting those up. Thanks for your indulgence.

Just wanted to let you know that CYPHER MEDIA is now online. All the bugs have been worked out. So far there aren’t too many videos up, only Jon’s four episode arc on MARCUS WELBY MD as architect Eric Brandon and his episode of McMILLAN & WIFE The Face of Death where he played John Thomas Clark, the mobile artist. I’m right now working on clipping up some of Jon’s other work, so please keep an eye on this space for that. In meantime, feel free to hop on over to the media site by clicking the clapperboard below. 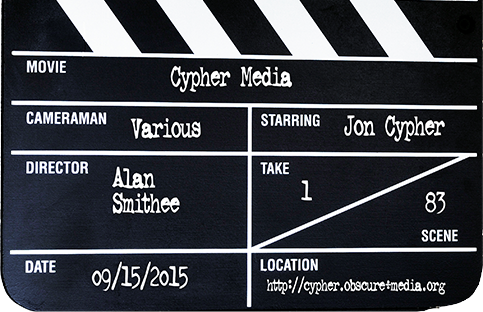 Sorry for the lack of updates, but I’ve been working on a media archive for the site of Jon’s work. So far I’ve been having all kinds of issues with it and no solutions as to the reasons why the installation is not working out. I’ll have a link to it when I finally get it working properly. I’m really bummed at the reasons why the script I’m using isn’t working because I’ve set a few of these up for other sites I have. I’ll keep knocking my ole head against that proverbial brick wall to get the thing up and running though. I think what I need is Chief Daniels to come in and give me a verbal lashing.

Apparently the reboot of MASTERS OF THE UNIVERSE is finally nailed a writer. His name is Christopher Yost who was the writer on Thor: The Dark World in the Marvel Universe. This might not be too bad. Yost says that MASTERS OF THE UNIVERSE is all about combining science with magic. I can certainly agree with that. If anyone saw Thor: The Dark World, it certainly mixed the two together effortlessly. Threw in some alchemy as well. I still don’t know how I feel about this. While I understand what those in the video are saying particularly Kristian Harloff, part of the duet known as The SchmoesKnow, who has been with the project for a time, I still will miss Jon as our own Duncan, Man-At-Arms. I loved his portrayal. So dedicated and loyal to both He-Man (Dolph Lundgren) and his daughter Teala (Chelsea Field), but also to the cause of keeping Eternia free and without Skeletor’s (Frank Langella) evilness. Sometimes things just shouldn’t be.

I just found this on Youtube. It’s an Emmy retrospective on HILL STREET BLUES from 1987, the year the show ended its run. Jon of course played the part of the pompous and somewhat bellicose Chief of Police Fletcher P. Daniels for the entire run of the series. There is one shot of Jon in the video. Daniels gets hit by series regular Dennis Franz who played the part of Lt. Norman Buntz. I might say that Jon took that punch pretty good. Here’s the video.

I wanted to let you know that MAVERICK :: JON CYPHER ONLINE @ joncypher.org has been renewed for another year. We’ll be around to give you the most on Jon’s long storied career. I have a few surprises in store, so if you’re a fan of Jon’s or Jon himself, please come on back to see what’s coming up. Thanks to all of Jon’s fans who have made this site what it has become. Take care and a humble thank you.